Sign up to the Gesamtkunstwerk eMail Newsletter to receive a selection of consistently intelligent coverage of art, architecture and design culture.
Philosophy « Back To Home
April 09, 2014

“It is time that Vancouver started thinking about its inevitable fate: a great city of ten million people.” – Arthur Erickson, 1992 (Greater Vancouver population then, 1.5 million)

A visionary 1955 sketch, then two boldly inventive buildings by Arthur Erickson set our downtown city-building agenda for the next half century — signs of things to come.

Arthur Erickson’s Project 56 pencil sketch imagining of a future Vancouver, showing the West End re-made with soaring and twisting residential towers on the right, and vastly increased housing density on Kitsilano Point on the left, with an unrealized proposition of a new bridge to be built further west connecting UBC with the North Shore, its mountain backdrop can be seen faintly behind. Erickson’s drawing was inspired in part by Frank Lloyd Wright’s “Mile High City” and a similar unbuilt visionary scheme by Lous Kahn, but predates the more famous futurist urban propositions of the Japanese Metabolist or British Archigram groups. Amazingly, when Erickson pencilled this sketch, he only had completed two tiny wooden houses on his own.

View of the MacMillan-Bloedel Tower on West Georgia Street, by Arthur Erickson Architects (in association with Adamson Associates) showing the cast concrete ‘waffle’ elevation which slightly diminishes with each floor as it rises, increasing its perceived elegance. Not just the ‘Brutalist’ treatment of concrete, but also this building’s height and strong definition of Georgia Street challenged timid local design conventions, and it was controversial when it opened.

A sectional drawing from Arthur Erickson Architects of Robson Square, showing a “Media Centre” conference facility below (now UBC Robson Square), the roof gardens, waterfalls and elevation of the Law Courts. Erickson’s radical move was to bring nature into the heart of the city in a non-suburban manner, and to layer building uses into a complex but balanced hybrid of functions, a public building unlike any other in the world. 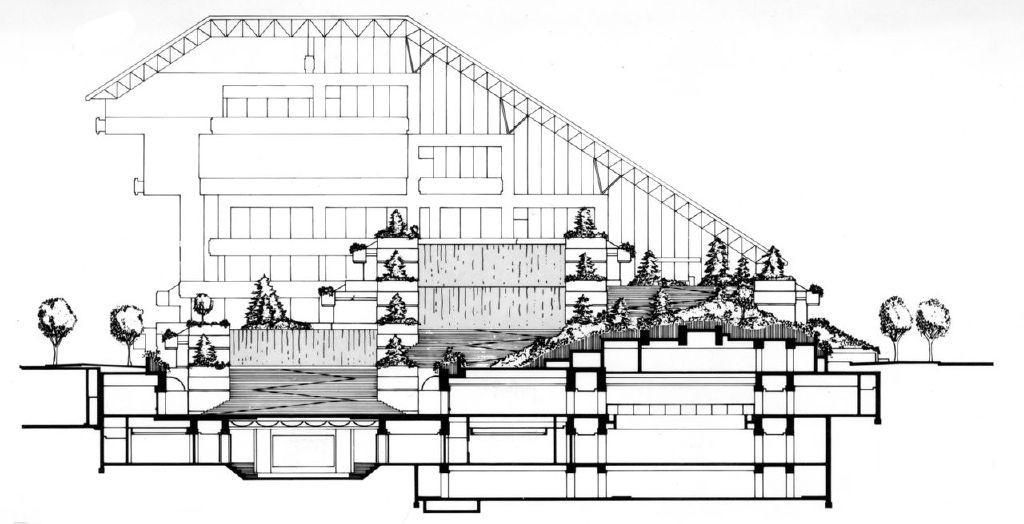