Sign up to the Gesamtkunstwerk eMail Newsletter to receive a selection of consistently intelligent coverage of art, architecture and design culture.
Philosophy « Back To Home
April 20, 2016

An Evening With Kengo Kuma: Recap

On April 12th, a mix of Vancouverites, architects, planners, city builders, artists and students gathered at the University of British Columbia’s Chan Centre for “Small to Large, an Evening with Kengo Kuma”.

Kuma took the audience on his journey from Small to Large, first exploring the small, soulful scale of his early Small Scale Projects. As his practice and influence have grown globally, so has the scale of his work but the intimate layering and connectivity to location remains. The mix of modern and traditional architecture initiated an evening of fascinating dialogue.

“Kengo Kuma is an architect without frontiers,” noted Ian Gillespie, President & Founder, Westbank, in his introduction. “We believe that our role is to bring the best talent together to create more interesting skylines. It is also our role to use the best talent to meet the challenges that urbanization presents. We have a particular affinity for the Japanese architectural community, which brings a fine-grained perspective.”

As the evening unfolded, it became clear that Kuma is expanding the scope of Japanese culture by redefining its traditional messages in a modern context. “In the 20th century skyscrapers were isolated monuments. In the 21st century skyscrapers should part of the urban design,” Kuma explained. “I feel we are going back to tradition, but it doesn’t look like the classics.” 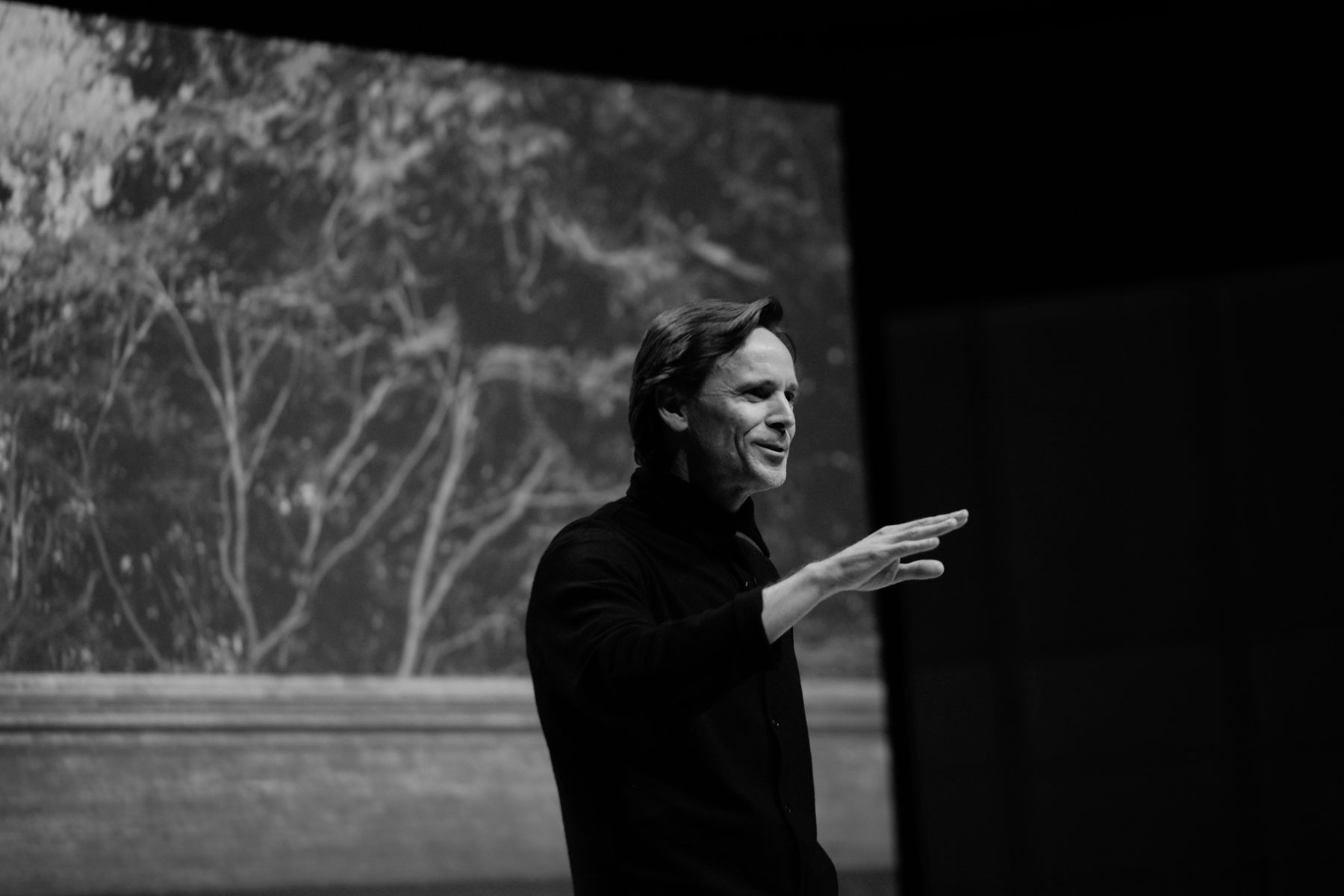 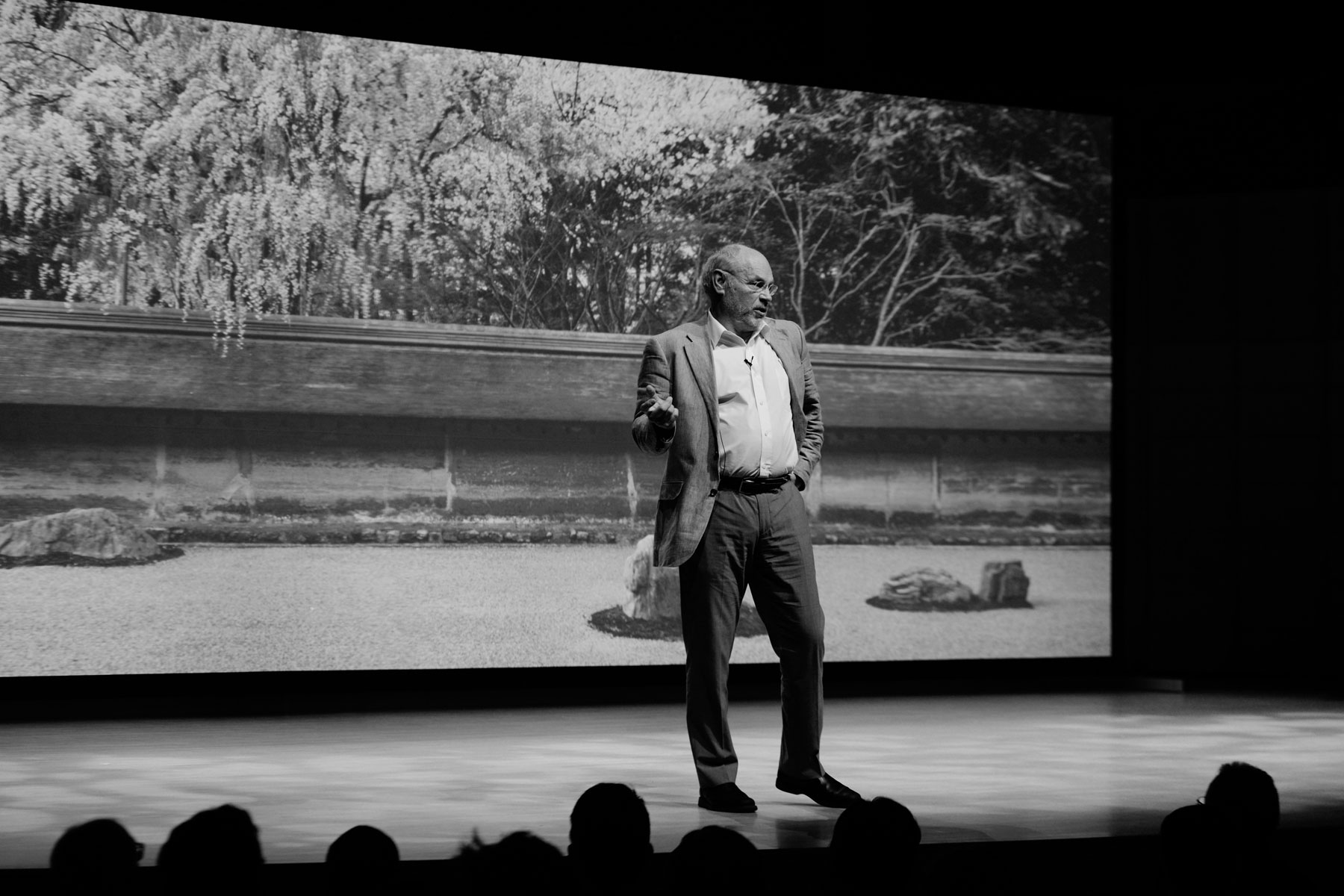 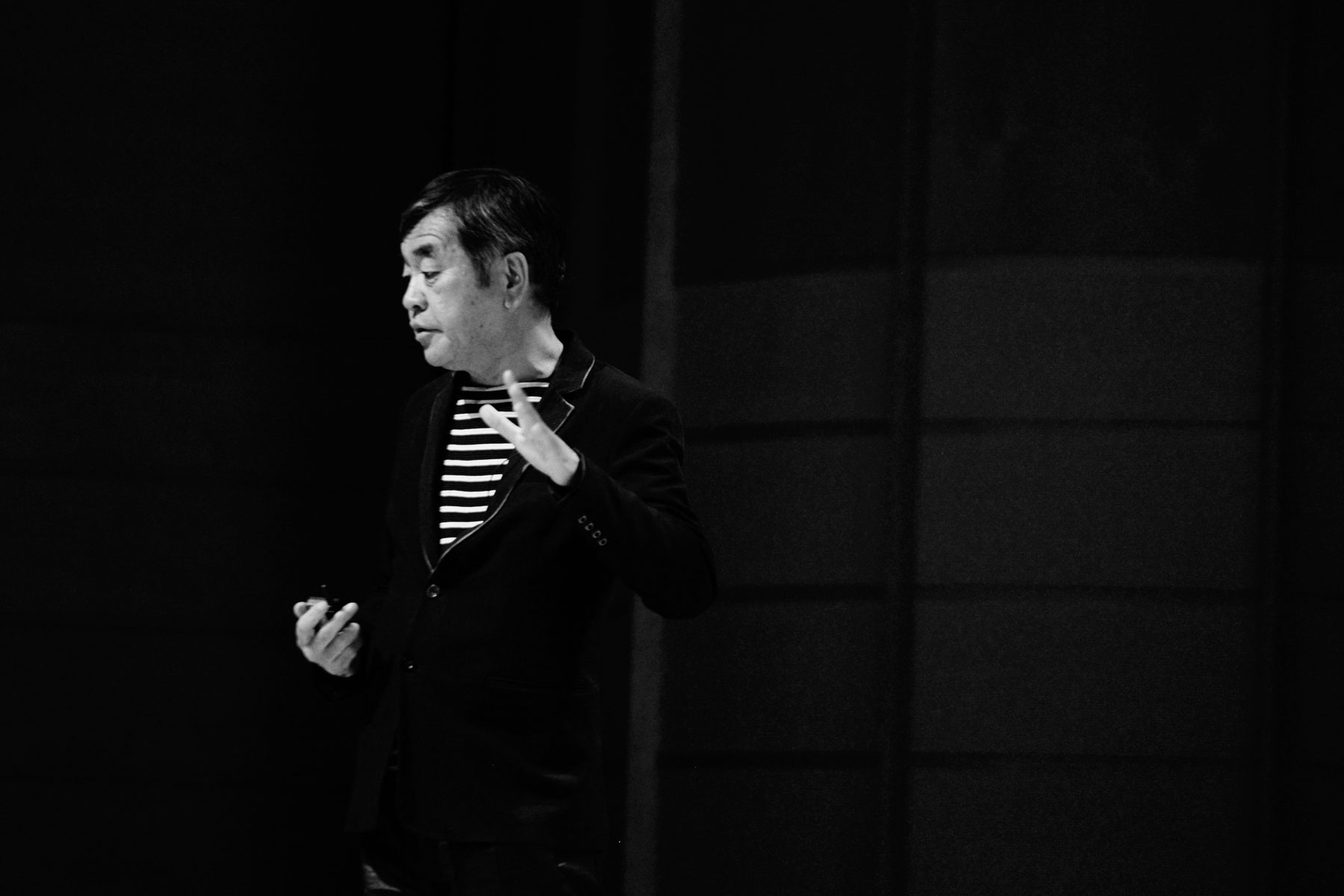 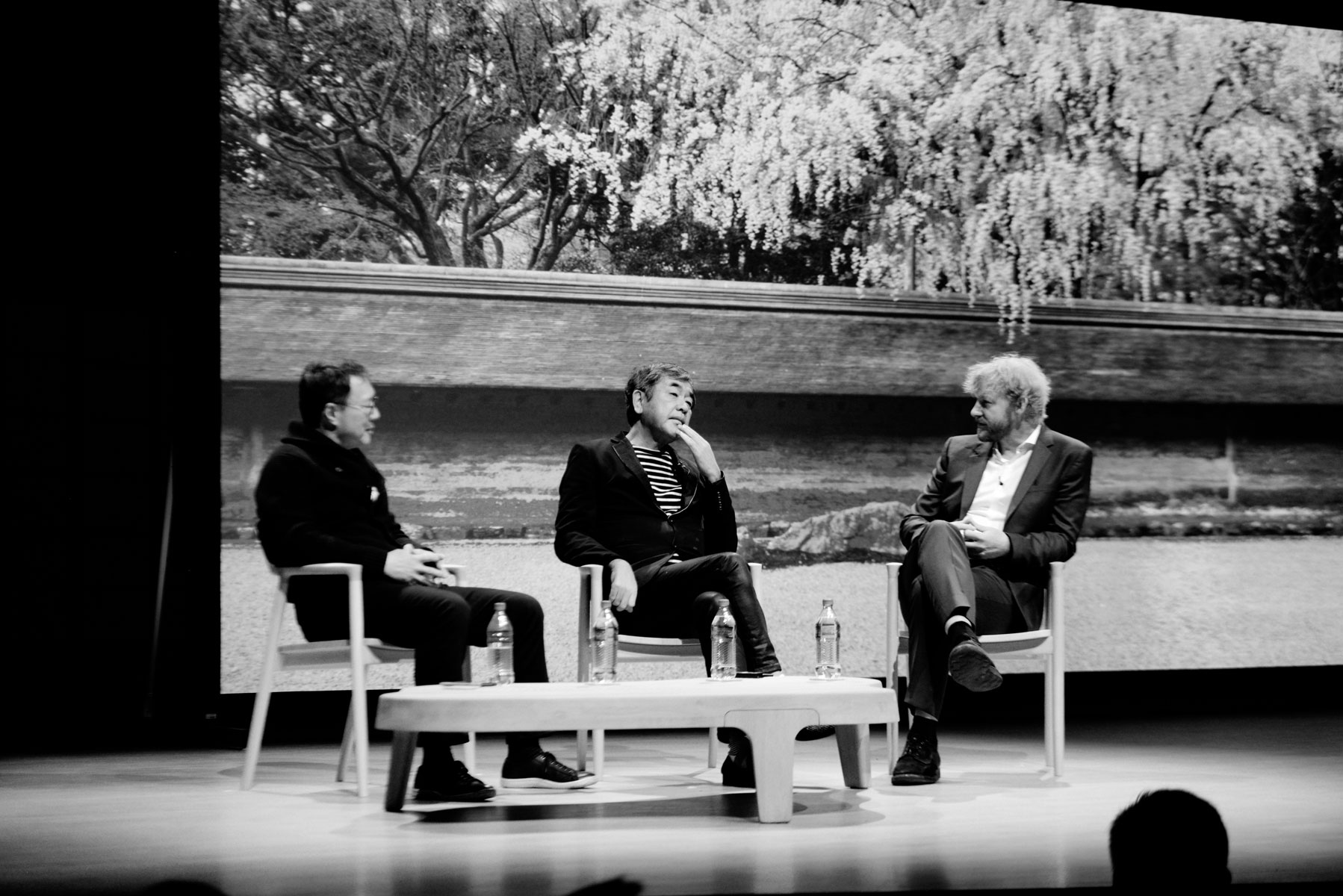 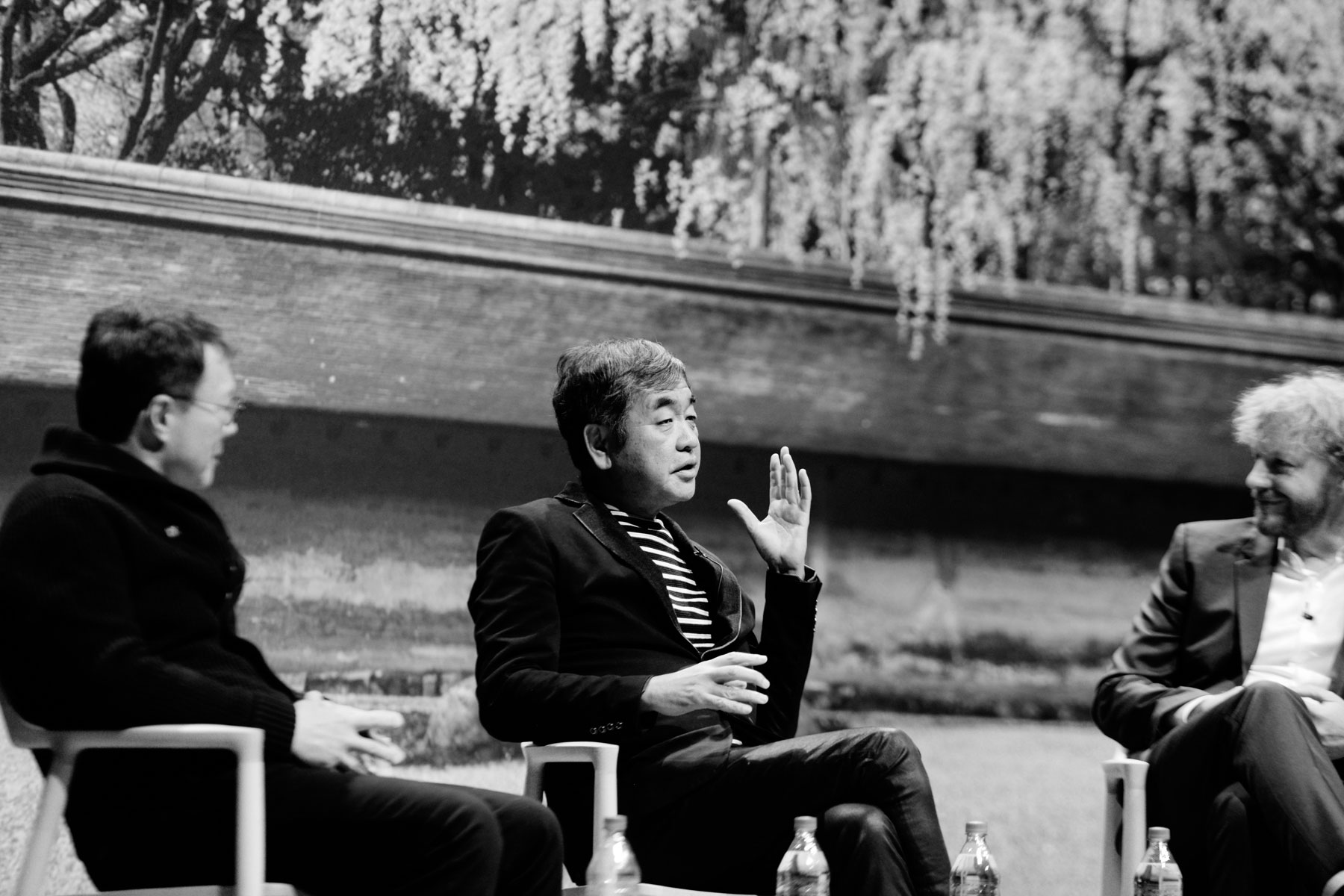 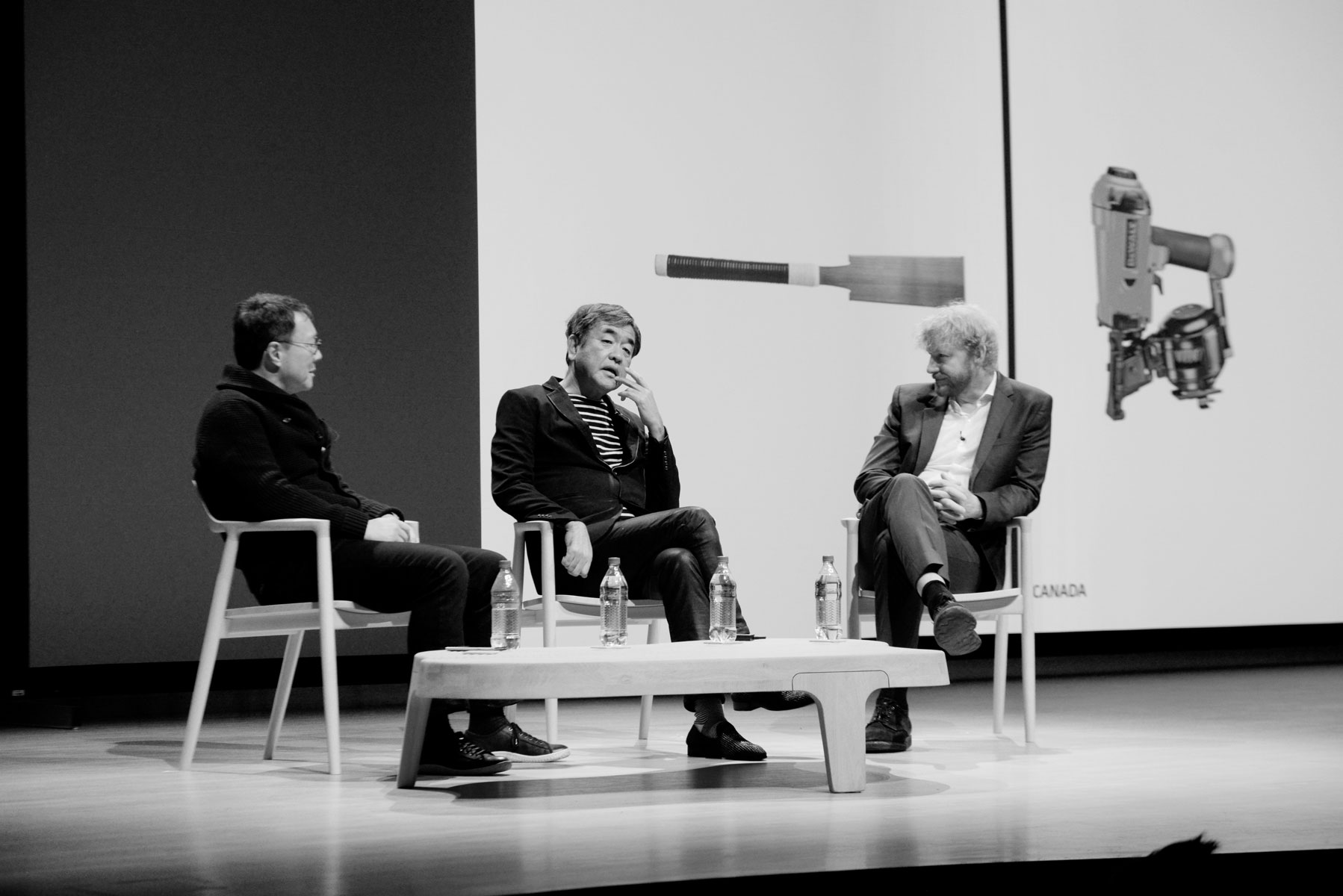 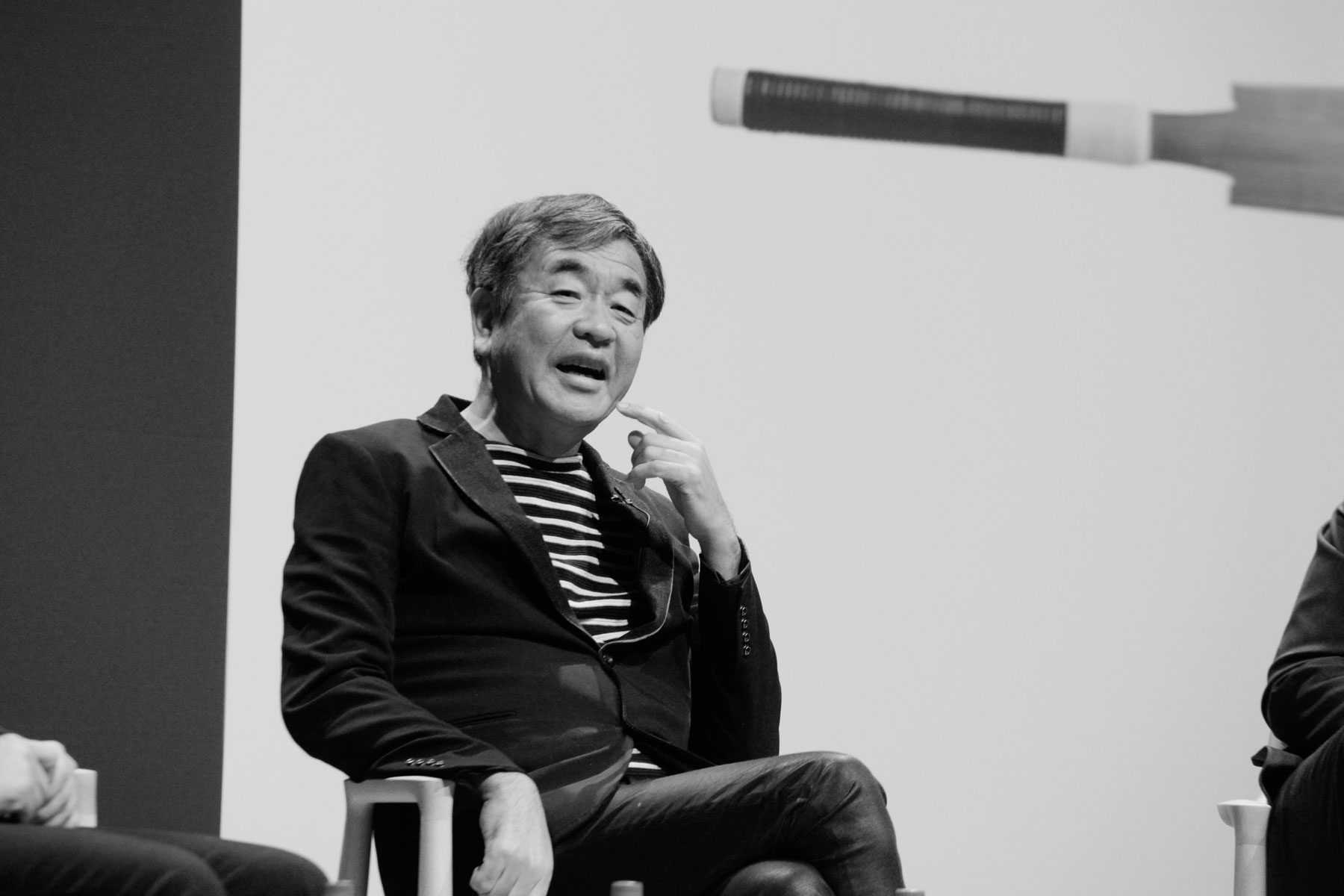 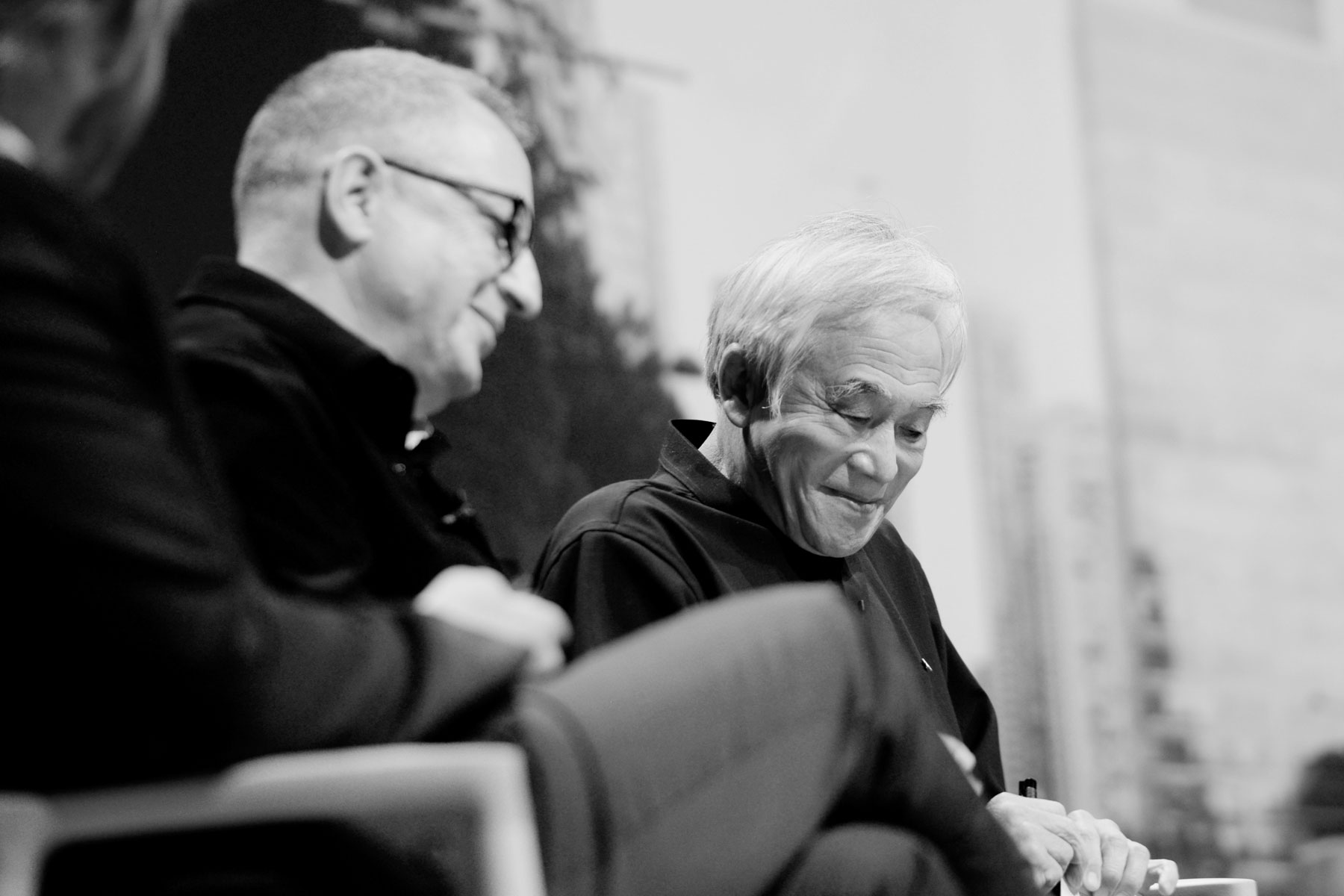 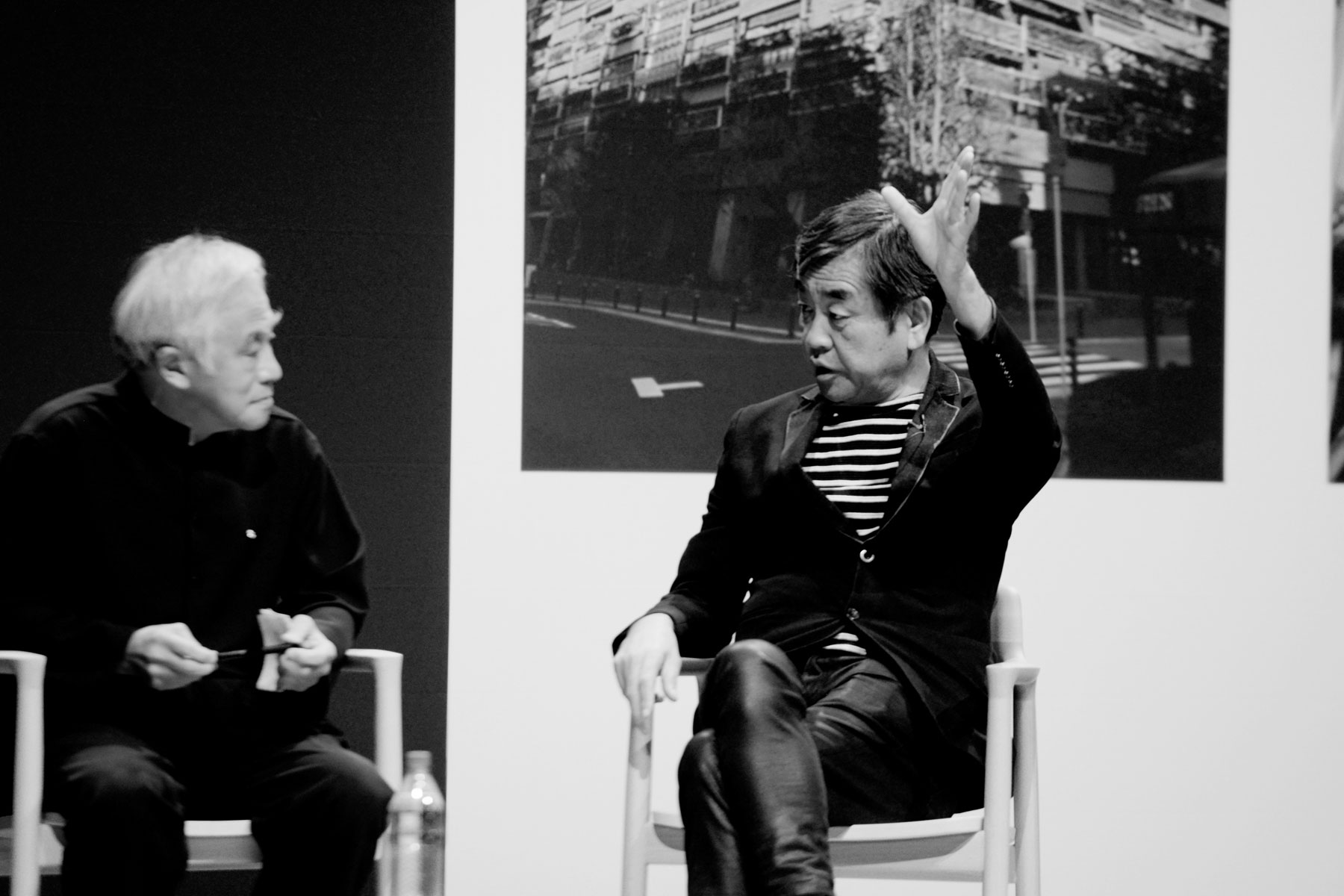 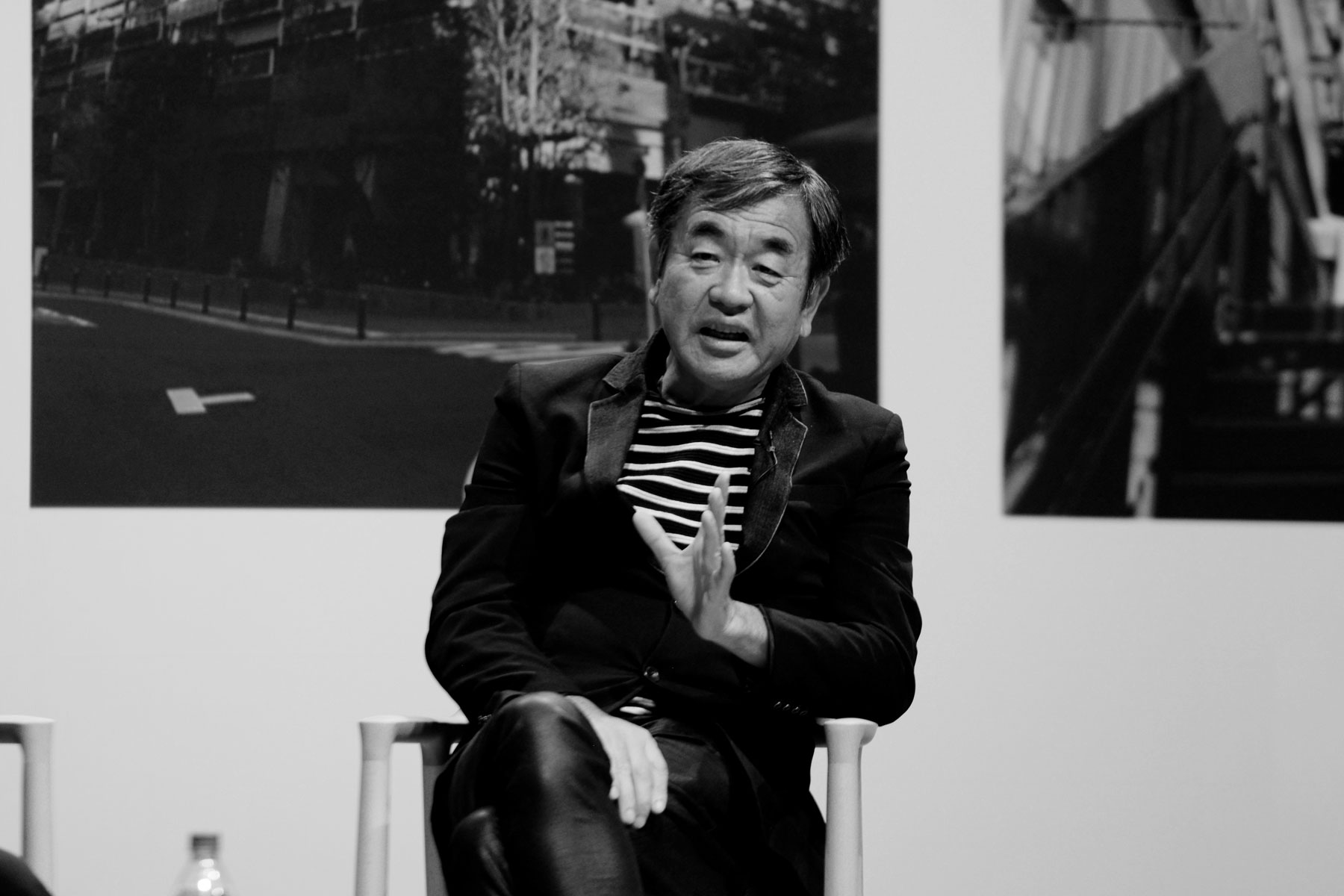 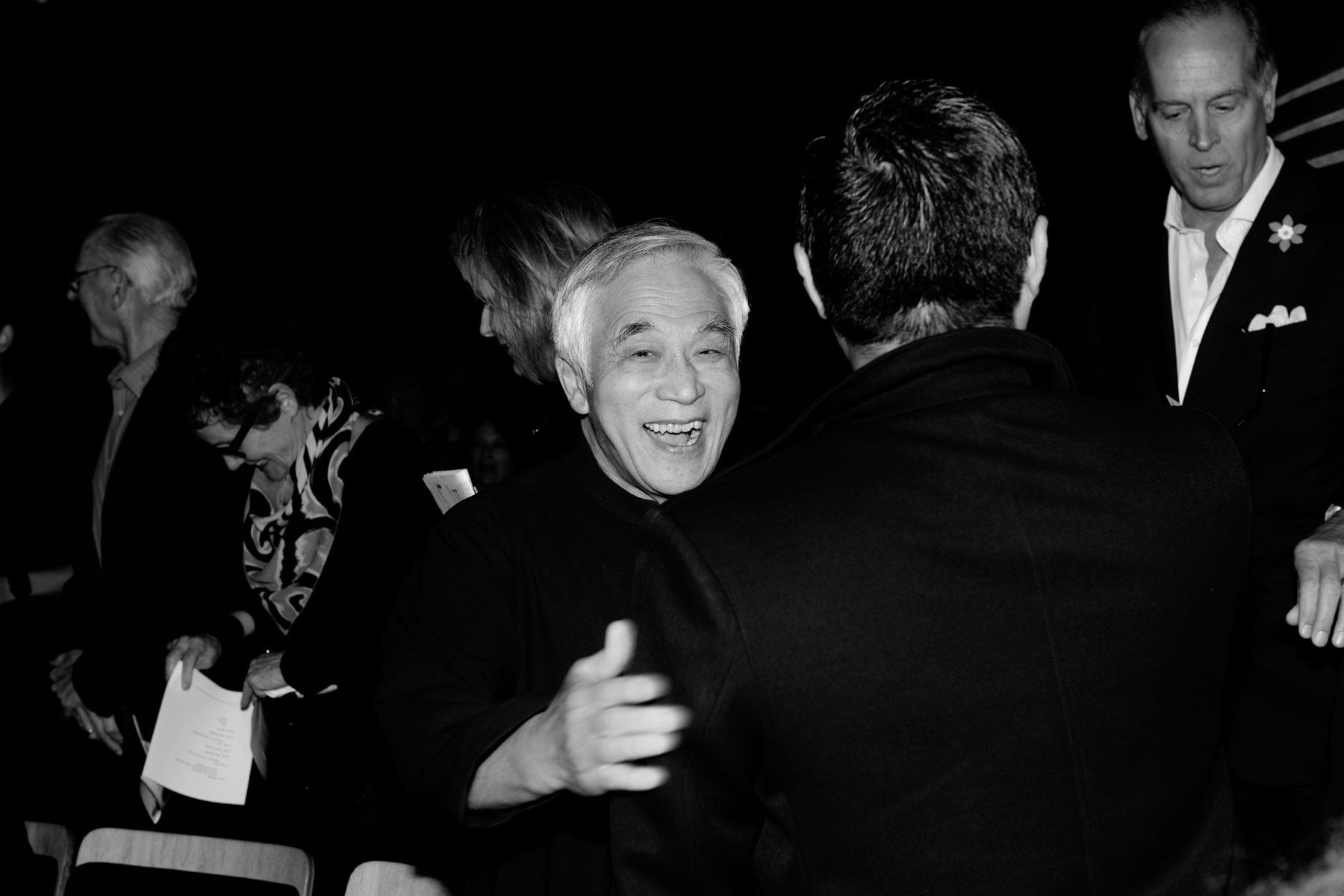 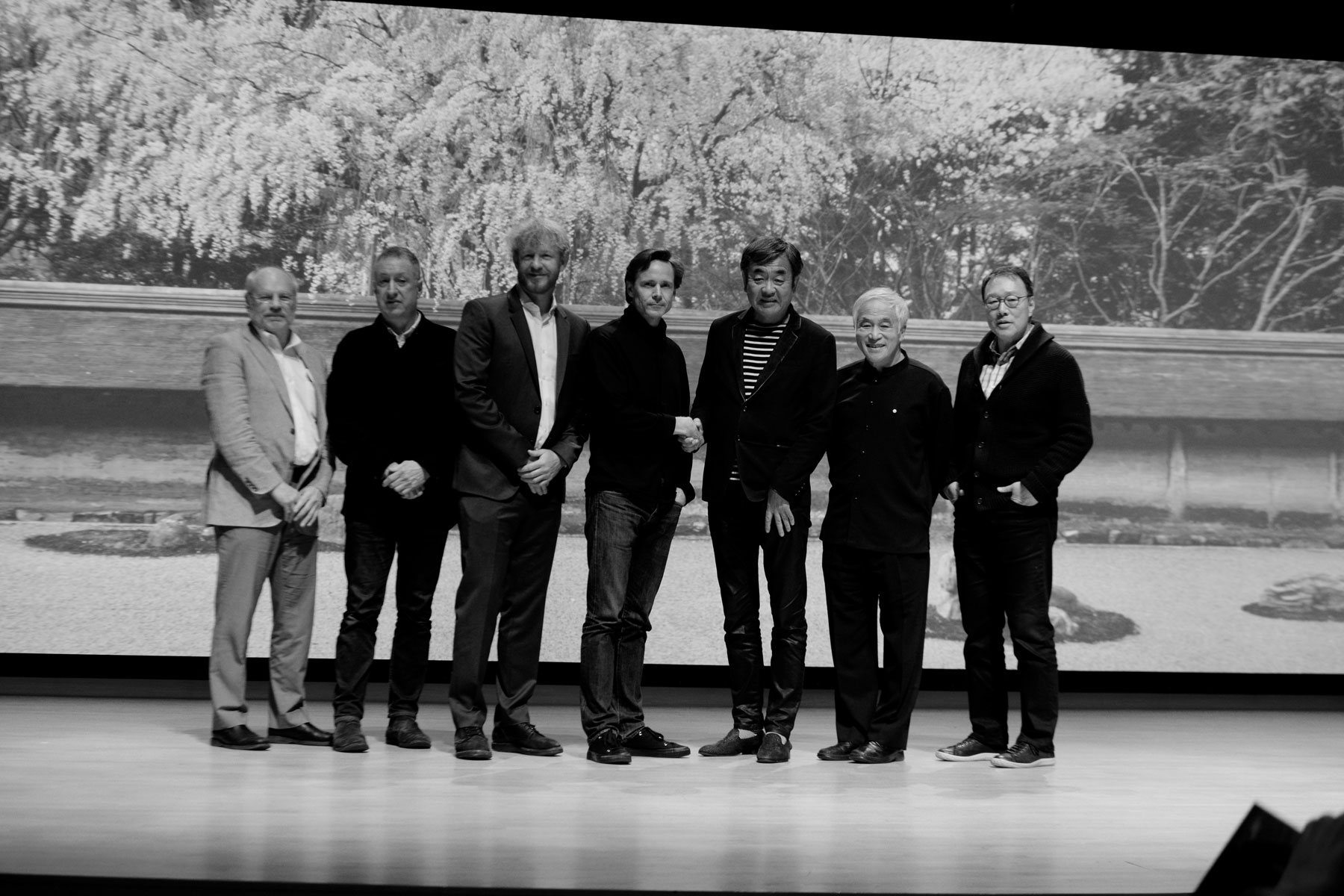 In the first half of the evening, the theme of structure emerged as an integral element of Kuma’s architecture rather than as just an applied technology. Kuma’s attention to structure, where it contributes architecturally, adds a layer of aesthetic and functional richness to his designs.

Observing this approach applied in pavilions like Cidori (2007), Casa Umbrella (2008), Water Branch House (2008) and Sensing Spaces (2014), the audience experienced a variety of design explorations that inform new new ways of thinking about structure and materials. Kuma’s presented works engage the materiality of architecture in order to challenge its usual meanings.

A lively discussion with James Cheng and Michael Green about Japanese architecture and Kuma’s various influences provided a rich context for the second half of the evening — exploring Kuma’s Large Scale Projects.

Beginning with the Hiroshige Museum and ending on Alberni, Kuma reinforced his guiding philosophy that buildings should connect with the natural environment. “Layering can connect spaces and connect the building with nature” he says, “In traditional Japanese architecture, the control of spaces was done by layering indigenous materials, light screenings, such as lattices, or shoji screens.”

For Kuma, a building’s main purpose is to blend into its surroundings and thus avoid the modernist tendency of replacing the natural with the man made. Kuma’s campaign to bring Japanese-ness back to architecture has had fascinating results. The architect’s Starbucks building in Fukuoka is a high-tech remix of traditional elements and influences. Designed to fit with the architecture of nearby Dazaifu Tenmangu, a major Shinto shrine, the woven wood makes the building seem more like a public art installation than an a multinational coffee shop.

In Tokyo, one of Kuma’s recent projects, the Asakusa Tourist Center, is a perfect example of the impact his work can have on an urban landscape. The layered, eight-floor building is eye-catching: its floors appear unequal in height and rise at odd angles. In the background, Tokyo Skytree, a 634-meter metal tower, looms ominously, “I don’t like the steel structure”, noted Kuma. The brutally modern Skytree tower could not be any more different from Kuma’s work.

Finally, Kuma spoke about Alberni, a proposed 43-storey residential tower in Vancouver, by Westbank and Peterson. This will be the first residential high-rise in North America for the architect and his firm, Kengo Kuma and Associates (KKAA).

Proximity to nature is at the core of Vancouver’s uniqueness. Kuma’s architecture at Alberni intentionally creates connections and encounters between people and nature. The goal is to negate the isolation that engenders alienation in our urban landscape. The aspiration is to re-fashion nature into something that not only looks natural but enhances the natural – to create a skyscraper where human beings can live in harmony with nature. This might better be described as urban wilderness. Kuma’s design highlights the important quality of “nukumori”, or warmth that allows us to feel that we are, at once, an integral part of the city and nature.

The evening closed with a panel discussion, featuring architect Bing Thom and professor George Wagner, moderated by Michael Green, that provided the Vancouver audience with insightful perspectives on Vancouver’s pattern of urbanization.

“I like cloudy days in Vancouver. The details and materiality of a building is more visible.” – Kengo Kuma

Without leaps of imagination or dreaming, we lose the excitement of possibilities. As he has shown in many of his projects, Kuma is determined to “dwell in possibility”. Kuma’s reinterpretation of traditional Japanese architectural elements for the 21st century has involved serious innovation in the use of natural materials, light and design that enhances rather than dominates. His architecture adapts traditional elements to create statement-making buildings that still draw links with the wilderness from which they have emerged.